I knew my life would change with a child, but I didn’t expect it to become so much, well, bigger! It feels as though all my time is taken up with purpose and LIVING that it had been kind of devoid of before. Now, everything I do is for that happy little sausage that I am blessed to called my son. 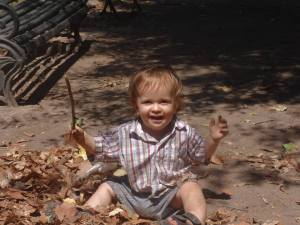 So it is July. Next month is my 28th birthday – eek! Ten years ago I was living in England with my grandparent, after failing to save for a high school exchange to Chile

for more than two years now, I can talk in Spanish (with plenty of mistakes but), I have a Chilean Mr, a half-Chilean toddler and the world is looking more and more like the oyster I always knew it was (it had just been a bit sandy before I think!). I am lucky indeed.

So where am I going with this “oh Helen your life is so fantastic” spiel? To two places: the first is to wax lyrical about my senor and the other is to talk about my new volunteering project coming up, to give back to the place that has accepted and provided for me so nicely.

Obviously I will start with Luis. For the last six years or so, Luis has been working nights in the taxi taking passengers from Santiago’s streets. I love Santiago’s taxis. They get a bad rap for being dodgy, and a few do have some tricks. Think switching notes and saying “oh you’ve only given me a 1000 pesos” instead of bigger, or taking longer routes, or sometimes running a meter that goes up thanks to a little button by the driver. But in my experience (and I have ALOT) taxistas here are courteous, curious, and beyond helpful. I’ve had so many free rides (from Los Dominicos to El Salto was one), heard so many interesting stories, been offered jobs

/advice and just met lovely people, mostly. The other day, I took one that was completely covered in tiger print inside. Like, everywhere. I thought it was a joke (and I thought I was going blind too) but the guy was genuine, he just really loved tigers! We had a great convo about our favourite animals. I’m sure, though, that dodgy things happen in that car.

A google search tells me that there are some 30,000 black and yellow taxis in the day here, and this job

pays so-so and is a bit cumbersome because of all the tacos.  This number drops by half in the night, because the risk factor increases substantially. Most family men call it quits around 9pm and the majority women drivers (they DO exist!) prefer to work the day shifts. But the night is where the money is at! You can make excellent plata because the traffic has all gone and, especially on a Thursday/Friday/Saturday, there are lots of drunk people to take home. One of the best perks is … strip clubs. You knew that was coming, right? Don’t be shocked – strip clubs are a reality of every city now and Santiago is no different. The top-tier ones pay commission to any taxista that brings passengers (if they go in and claim it). For Latin American tourists there’s a certain price, for other non-Chileans another, but  for ‘gringos’ from countries like New Zealand and United States the commission can be a good 10,000 per head for Luis (which is soooo much money!) There’s no selling involved on Luis’ part, he just claims his dues for taking a passenger already heading that way.

Some of my favourite stories have been Luis’ taxi stories. Before Emilio, I used to wake up when he’d come in to hear what exciting adventures he’d had that day: famous people, foreign people (who are always amazed at Luis’ English), drunk people, people doing cocaine in the backseat, people hooking up, people with prostitutes, the list can go on. One time, Luis took a worker from a Cafe con Piernas and a regular client, that she had been soliciting on the side (note: this is not a requirement of the job

). In fact, she was married and her husband was waiting at home for her, with no idea in the world that she was with this guy! She’d been seeing him for a bit and he’d fallen helplessly in love with her. After they’d got out, the guy left a bunch of poems and songs he’d written for her on the back seat (or did she forget them?!) We read them the next day. They weren’t bad. And yes, he had it baaaaad for her!

But, with the good and the interesting, there is also the bad. I remember being pregnant and being so scared that something would happen to Luis before we had a chance to reunite as a new family. One time, he told me that he’d been threatened at gun point. Another time, he’d had his phone and money nicked by two guys with knives. In hindsight, these last were nice thieves because they let him keep his sim card with all his photos and contacts on!

Luis is now changing jobs to work for TranSantiago, as a public bus driver. Jesus H Christ, what a kerfuffle this is turning out to be! So far, he’s had three months of daily training in Maipu, Providencia, Pudahuel and then tests in Lampa. Sometimes he has to go all the way (in rush hour) to Maipu just for an hour. Sometimes he has gone to Pudahuel just to sign a form. These are all places that are ridiculously far away, like a good hour and a half but sometimes even more! Emilio has had to accompany him on a few trips when I’ve been working. He’s also had to go here, there and everywhere signing stuff, buying stuff, swapping stuff etc. That’s where he is right now in fact – its our first free day together in an age and he’s off downtown taking back a jacket with the wrong logo on it (when they KNEW it was a mistake when they gave it to him!)

He’s having to learn mechanics as well as in-depth knowledge of the roadcode and laws, amongst other things, and to be honest I had no idea all this went into driving a bus! I don’t know how I feel about it all. Luis has a degree, he’s travelled, lived overseas, got plenty of business experience and he speaks two languages fluently, and here he is driving a bus! If it were up to me he’d have his own country to run! Since it’s not, I have to be happy with what makes him happy, and when he says he’d rather drive a bus then ok! And its true – he gets life and health insurance for him and Emilio, he gets paid holidays and discounts at places, and he gets to finish work by four every day. In an office job, he’d have to work ridiculous hours and get stressed, and I’d much rather have Luis around then have all the money in the world

Luis is still going to work in the taxi (would you pass up Friday and Saturday strip club visits? For the money haha). It’s going to be lovely having him sleep normal times and having someone to keep the bed warm. And think of all the ACTIVITIES we can do with all this extra time awake (Step Brothers reference – if you haven’t seen it, watch it – now!)

I did say that I would introduce you to my new volunteering project, however I think now I shall save that for the next blog post. Keep you all waiting and all that. To be clear, when I say “you all” I do know its just Mum reading this blog! I will say, though, that there are exciting times for Recoleta and I ahead 🙂

Here are some pics of Emilio in the taxi – he is car OBSESSED! 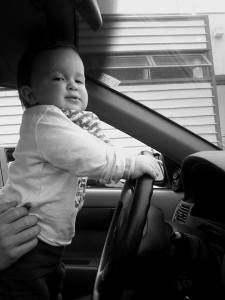