I have always loved to write. It is the only thing I really know how to do, and the only thing that defines me from someone else. My goal with this blog is to one day turn it into a book – the ultimate of ultimates for a nerd like me – and maybe one day be able to provide for my family just by writing words on a page.

Below is a story completely unrelated to Chile

, except the fact that I wrote it here. It is a little bit dark, but I hope that it strikes a cord with someone.  Enjoy!

They say that you always remember your firsts.

I remember the first time I saw my brother Charlie. He was only a few hours old, with matted brown hair and skin that seemed too stretched for his bones. I was scared of him at first until my mother placed him in my arms, and he scrunched up his face with a little sigh. At that moment I knew I was a big sister for life, and my heart melted.

I remember the first time the men came as well. I was eight and standing in the kitchen watching my mother peel potatoes. Suddenly my mother gave a little exclamation and ran out the door. I could hear her speaking angrily with people outside but I was more fascinated by the small droplets of blood she’d left behind in the sink. They swirled around and mixed with the potato skins, seeping deeper and deeper until the bright colours had all but disappeared.

‘Go to your room Jenny,” she told me after, and I was shocked to see how her eyes had changed. My mother always had beautiful eyes – so deep and grey like fairy pools – but I remember how empty they had looked then, and the emptiness scared me. I ran from her, and scooped Charlie up into my arms, and together we hid under my bed with our blankets and pillows stuffed around the edges. There were many strange noises that afternoon, and when my father came home I heard my parents arguing. It wasn’t to be the last time.

I also remember the first time I saw the flowers. Beautiful, they were. I woke up one morning and all the fields around our house were covered in tiny red buds, as though the sky had bled. Charlie and I raced outside, laughing as we picked up handfuls of flowers and threw them in the air. We had a dog then too, named Bilbo. He was jumping around us, barking, bringing us sticks to throw and covering us in slobber. My parents watched us from the house, and I remember that my father put his arm around my mother and for a second they looked almost happy.

Life went on as normal. I went to school and learnt about far-away lands, such as the pyramids of Egypt (my favourite), and about not so far-away places such as the City, and about things I didn’t care about much, such as Money and War. It seemed like all we ever heard about in those days were those three things. Dates came and went. School holidays. My birthday. Then all of a sudden it was Charlie’s sixth birthday and we were so excited because we got to have a party. I created all kinds of games for us to play and helped mum pick out a cake shaped like Tyrannosaurus Rex from the Bakery. I remember this moment because she used a new card to pay for it. It was silver and I watched its reflection bounce off the store windows. Charlie loved that cake, and after he’d blown out all the candles we all went to play outside amongst the red flowers with our cousins. I remember my Uncle Joe talking to my father, all quiet like, when my mother went to the kitchen to bring out the sausage rolls.

“Have they told you what they’re doing yet?” He asked and I could see my father stiffen.

“They would never tell us Joe, but they’re keeping the roof over our heads and food on our table – otherwise we’d be out on the street.”

“Don’t say that – you know that you and your family are always welcome at my house if times get tough.”

“Times are tough for everyone now, aren’t they? But I trust in them and for once things are ok. Plus, if we can’t trust our own government, who can we trust? And the flowers are real pretty, like, the kids love ‘em.”

“They sure are.” He said, and then my mother was back, laughing with my Auntie Caro. Her eyes were shining – big grey orbs like the moon – and her cheeks were rosy and filled with a hundred smiles.

The scream came from nowhere. I remember it rising up and up; I could almost see it in the air, red and pointed like wire, curling around us all with its jagged edges.

It was Bethany, my eleven year old cousin. She came running up, too upset to form words. She pointed wildly to the hedge that encased the property, her face reddening and bloating like a balloon. Uncle Joe went to the hedge, and emerged a few seconds later with a darkened face and told the children to keep away. I remember his look to my father, and the pure shock I saw there, and then I don’t remember anything else but Charlie’s high-pitched wail, “But Mummy – where is Bilbo???”

The men came a few times after that. The first time Charlie and I stayed upstairs in the fort we’d built out of chairs and sheets. My mother did not read us a story that night.

The second time my parents sent us to stay at Uncle Joe’s. I loved being at his house, it was always so cosy and full of laughter, probably because of all the children. We played Scrabble, watched a movie, even ate McDonalds! It was so different to life at my house, with its creaky floors, empty cupboards and shrieking windows. Even Charlie slept the whole night through, a nice respite from his regular nightly scream.

It was around this time that I came home to find the table filled with wrapped presents. I hold onto this memory tightly, as I remember the look of joy on Charlie’s face. He danced around the table, leaving a trail of coloured paper behind him. The presents were not the only surprise. That night we sat in front of a shiny new fireplace – our faces lit up by its glowing tendrils – and dunked chocolate biscuits into steaming cups of hot cocoa. It was bliss. We always went to bed cosy and warm then after. Uncle Joe and Aunt Caro came over more often then. One time I ran to her with a big bouquet of red flowers that I’d spent hours collecting. The flowers spread all around our house and across all the neighboring fields. What I loved was that every flower seemed different, and the further I went from home the darker and more unusual each flower became. It was almost as if they growing, evolving, mutating with each step that I took.

“Here Auntie, here! I’ve made you a present!” I cried and presented them to her. She took them hesitantly and exchanged a look I didn’t understand with my Uncle.

“Smell them! Aren’t they lovely? I’ve never smelt such lovely flowers in all my life before!” I sang and waited expectantly. She smiled and leant forward to inhale quickly.

“Mmm they certainly are beautiful, Evangeline. Aren’t I so lucky to have a niece like you! Now how about you show me that picture Mum says you’ve been drawing?”

I nodded and led her by the hand to the lounge. But no matter how much we laughed and talked that night, I couldn’t quite shake a feeling of tension. Dad and Joe disappeared many times that night, they sat out on the deck while Dad smoked cigarettes, a habit he had taken up with a passion, much to the chagrin of my mother.   I went to bed before they left, and next morning, when I left for school I saw a bunch of red flowers, tied with a black bow, upside down in the rubbish heap.

The final time that I remember the men coming to our house, my parents were no longer speaking to each other. The atmosphere was thick with tension – if you could slice through the air with a knife it would have shattered into a million pieces. There were two men in black suits – I remember this because I’d never seen a real live person wearing a suit before. They both had sunglasses and briefcases that they had to type a number into to open. They sat at the dining room table with my father, whose face was haggard from losing so much weight, while my mother poured them all cups of tea and ground her teeth. I watched through a tiny crack in the door as my father signed paper after paper, and then shake their hands when they went to leave. The moment the front door closed my mother started crying and I remember her words like it was yesterday .

“It will be alright Vivian. The scientists will know how to fix this. They will slow down – they will stop – the plants from growing. They won’t hurt anyone anymore, I promise you.” I waited to hear more but at that moment Charlie appeared next to me, with a look of panic because his face was covered in blood. I took him to the bathroom and began to tidy him up, and his voice shook as he told me he was scared.

“Don’t be scared Charlie-bum” I told him, “do you remember the magic ladder song?” He nodded and we began singing it together. We’d made up the song a few years before when the factory had closed, and people had just suddenly become sad.

“Where does the ladder go? To the land of pharaohs. And where do we climb next? To see Tyrannarasauras Rex!” We sang it together, giggling as all the red was wiped off of Charlie’s face. It was then that I realized that it wasn’t a nose bleed, and that it was his eyes and ears that were leaking.

I remember so many firsts. I remember so many lasts. I remember saying goodbye to Charlie. I remember the day the school closed. I remember us driving away, and the last time I ever saw our house. The flowers were stretching everywhere around us, as far as the eye could see, moving in the breeze like an army of red soldiers. It had looked pretty once. Then, as we drove away, they appeared to tower over the car, and the further we went the blacker their colour became.   We travelled for hours – each town emptier and grimmer than the last – until finally we reached the mountains. When the car finally stopped, I got out. All I could see was the view around me. There were colours of every description – the blue of the sea, the bright yellow of the sun, the trees were a million shades of green – it is beautiful to behold. I see a whole new world – and at last, there is no more red. 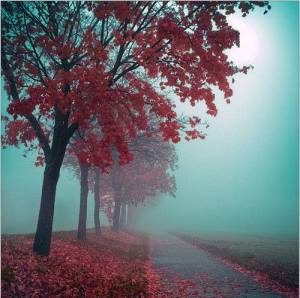