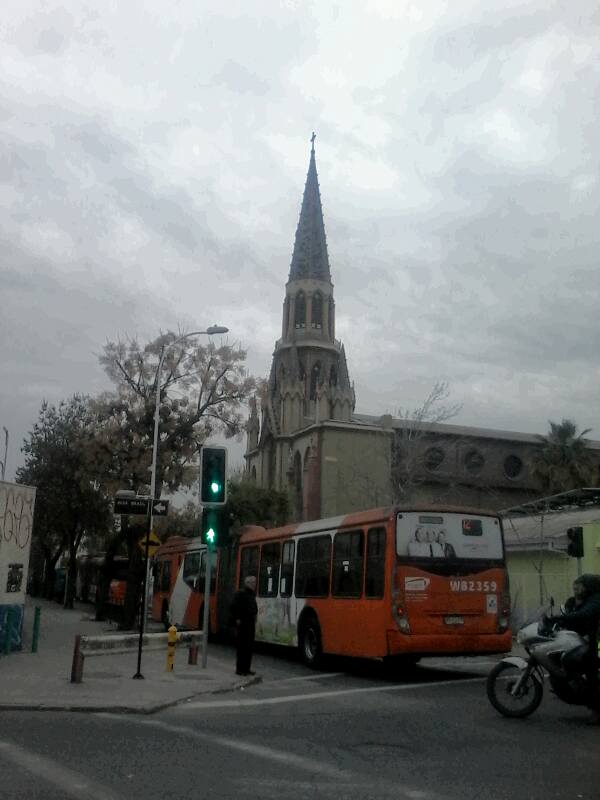 Be honest: have you ever taken a bus and had the subconscious thought that the driver was  not very intelligent? I have.

It pains to me say that, but yes, I have to admit that deep down I was a bit of a bus snob. When i was growing up, we had a lot of nutty school bus drivers, and when I lived in Auckland I seemed to always encounter someone unsavoury on the bus ride to uni (how else to put that?!).

I now realise how wrong I was.

If you have been reading my other blog posts, you may remember that Luis is now working for Santiago’s bus company, TranSantiago. It is made up of lots of local companies, and Luis works for one based in Huechuraba called Al Sacia. It’s not the best – he usually works a lot of hours without a break (even to pee!) – and it took about four months in total for him to secure the job, after months of training and running around. When I say training I mean it – Luis had to intensely learn about his rights, passenger’s rights and how to react to any kind of situation, as well as mechanics.  He tells me:

“What people don’t realise is that the big buses – the micro oruga (caterpillar bus) – are incredibly difficult to drive and the driver can not see anything behind them. There is no visibility so that’s why accidents happen alot. All the buses are state-of-the-art machines – using the top mechanics in the world –  but they are still not as safe as travelling on the metro. It’s incredibly stressful driving the bus without even taking into account the passengers!”

Perhaps this accounts for why today the driver had no idea we were waiting with the pushchair and didn’t open the middle door until we asked. And then maybe why when he trapped a woman’s hand in the door and kept on driving he had no idea. We were up front near the driver and had no clue either until someone walked up and started shouting at the driver. We literally could hear nothing from the back. The woman was actually very hurt and the driver rerouted to the hospital. Luis intervened and explained that the lady should pass on her details and begin the process to get Al Sacia to pay, because very few people are aware that that kind of thing is within their rights. 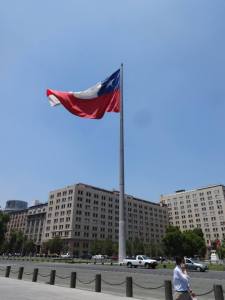 I’m afraid I have no idea what happened next because we got off and walked home. On the way I quizzed Luis for some tips. Here they are:

How To Keep Safe on the Bus

I’ve learnt lots of other interesting things since Luis began working for TranSantiago. Like the bus driver should never fight with someone outside the bus – if he does it can’t be classed as self-defense. And that there isn’t a brake like on a car, there’s actually a series of breaks that the driver decides to use depending upon how fast he needs to stop. There are also a number of drivers who insist that it is illegal to open the middle door for disabled passengers or for pushchairs – this law has now been changed and you are perfectly within your rights to enter by this door if you meet those requirements. I’ve also learnt that TranSantiago is a private company that the State pays, and they do so thinking that there are buses passing every ten minutes (are there really??). It’s made up of lots of local companies each one without different regulations and perks like breaks.

I actually love taking the bus – its my favorite method of travel here. While I appreciate the fastness of the metro, I find it often very uncomfortable and a nightmare during rush hour (though I will say the service has improved dramatically since 2012). It can be all too easy to blame the driver when something happens for we all love to play the blame game, but its important to remember that the simple truth is that the job is not easy.

“It’s actually really, really difficult – much harder than anything I have done before,” Luis tells me, “bus drivers are incredibly stressed out just driving that f**** machine – you have no idea how hard it is to drive until its you behind the wheel.”

is full of them.  There are also many bus drivers who are cantankerous, old men on a power high. But the fact is that none of them are stupid and it was wrong of me in the past to hold such opinions, even if they were deep, deep down inside. You never know – the next time you take a bus you may have Luis transporting you and he has a degree and speaks fluent English!!

There was an error retrieving images from Instagram. An attempt will be remade in a few minutes.