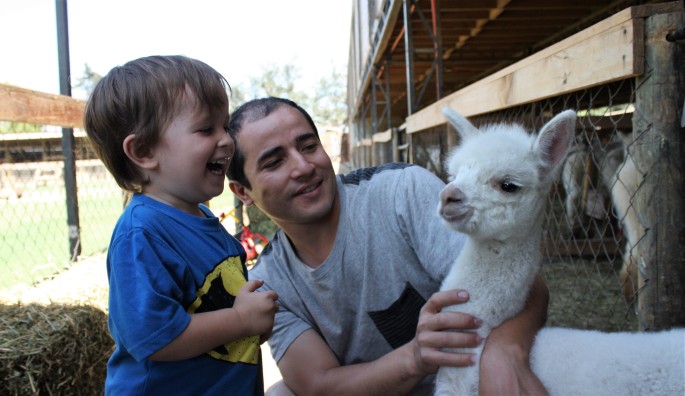 The gate of this farm is colossal – and no wonder, considering that inside is one of the world´s leading alpaca farms.  In front, there are alfalfa fields as far as the eye can see, right up to the looming hills that characterize so much of Chile.  On the day we visited, these fields were being harvested for the alpacas to eat, the tractors rolling over the proud grasses with a gentle hum. 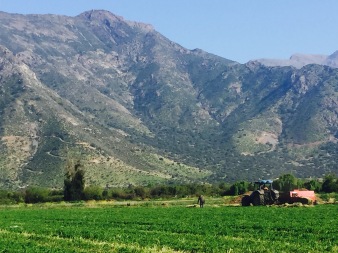 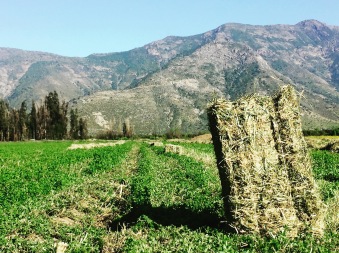 Upon entering the farm, it is clear that the alpaca is the star. You see them straight away, dainty heads upon tall necks peering over the low fences that corral them in to their paddocks and stables, their eyes alert and docile beneath lustrous lashes. Maria Herlinda de la Garza is the operator of the farm, first pulled into the alpaca world by her then-employer, grocery store mogul, Charlie Fitzmorris, who owned an alpaca farm in Chile and wanted to export to the United States.  After his death, Maria decided to continue working with alpacas because, as she writes on the website, ¨I had fallen in love with Alpacas and their amazing fiber … Their fleece has become my passion¨.

Quintessence was the result, a success by all definitions of the word, that today exports to some 15 countries around the globe.  They have bred some of the finest animals in the world, and have processed their fibres down to a shocking 12.5 microns, a measurement that is incredibly fine.

According to their website, Quintessence aims to ¨to create a social responsible  and sustainable company that will safe guard the environment while creating community jobs among local women and men of great skill and experience in this sector of the industry.¨

A tour of the farm can be in English or Spanish, and takes you around the entire grounds including the mill, culminating in the store which contains clothes, accessories and wool processed and created on the farm.

What IS an alpaca?

There are two breeds of this South American camelid that closely resemble their more familiar – and larger – cousin, the llama. Unlike the llama, they were never domesticated to do heavy duty as a beast of burden but instead have always prized for their fibre, which comes in an astonishing 52 natural colors (as classified in Peru) and their meat. Their fibre (it is not called wool) contains no lanolin and is famed for its soft and luxurious quality that is somewhat akin to hair. The process for obtaining the fibre is similar to getting sheep wool, and the animals are sheared each spring; adults produce between 1420-2550 grams of fine quality fibre and then around 1420–2840 grams of second and third quality fibre.  After being shorn, the fibre is selected due to its color, size and quality, then all its impurities are removed.  It is then washed, spun and dyed with cochinilla, or natural dye.  Interestingly, alpacas never overgraze, and consume around 75% less food and water each day than cows and horses.  They also traditionally live side by side with the Quechua and Aymara people, and this co-dependence is said to be one of perfect balance.

Why farm alpacas? Because the fibre is …

Warm, thanks to microscopic air particles that provide insulation suitable for all weather because it breathes.

Light, thanks again to those microscopic air particles.

Strong, because the alpaca is accustomed to living in an extreme environment (the Andes mountains) and this passes over into its fleece, making it last longer than most other fabrics like wool, cashmere and silk.

Luxurious in texture, a product of its environment, that is soft and comforting. Amazingly, the alpaca fibre can be processed without any chemicals.

Tours: Miles & Smiles Chile (us!) offer private tours in English or Spanish to Quintessence that can be combined with either Olmue or La Campana National Park. Visit our website here.

Despite Santiago being such a big city, it is fairly easy to escape and find yourself a sliver of nature for the day.  Some ideas:

La Campana National Park, the place where you can find yourself walking beneath endangered Chilean Palms, rustling some 40m above like tantalizing dinosaur food, each one hundreds of years old (and my personal favorite).