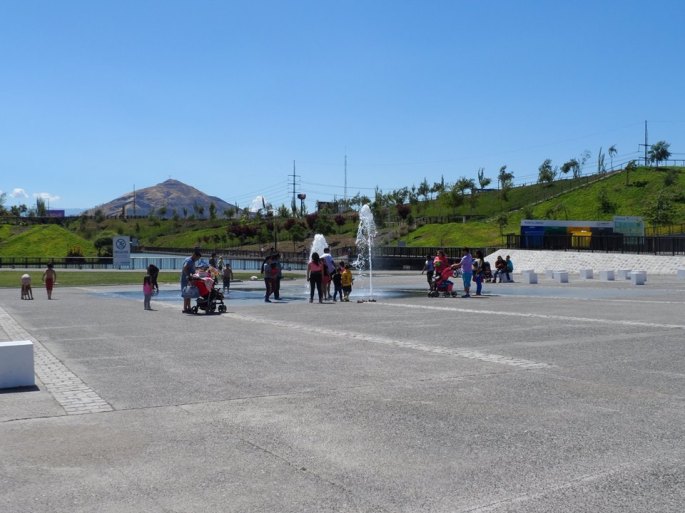 What is one of the easiest ways to make your child happy, get them to sleep well and that can be done easily with a newborn?

Easy. A park visit.  And no trip to the park would be complete without a delicious picnic.

Emilio just loves a picnic, thanks to one of my childhood books about picnicking on the moon called “Whatever Next”. There really is nothing simpler or better fun than packing up a blanket, hitting the supermarket for goodies or even baking a few treats, before searching for the perfect spot to unwrap it all and indulge.

Our usual spot is the Parque Bicentenario in Vitacura because it’s only ten minutes away from our house by car, plus it has birds and fish to feed (and Mestizo, one of my favorite restaurants here).  In summer they put out sun umbrellas and loungers that are free to use, which is great because the sun in this city is fierce. However it does have a few down sides, like it can be hard to find a park and the grass always seems to be sodden wet and full of bees (and Mestizo staff can be snobby too).  So when a friend recommended Parque Fluvial Renato Poblete we decided to give it a try.

This park only opened in January last year but I had never heard of it.  Why is that??  The place is FANTASTIC! My friend described it as “crisp” which I think is a pretty good summation because it still has that nice feel of being new … so crisp in other words.  It’s a big park – some 20 hectares according to Wikipedia – and it’s divided into two sections. The first is focused around a lagoon area where you can rent paddle boats (including life jackets) and the second follows the Mapocho river.

It’s pretty lovely and wonderful to walk around in. It’s filled with bridges that succeed in transporting you out of Santiago and into somewhere much more romantic. 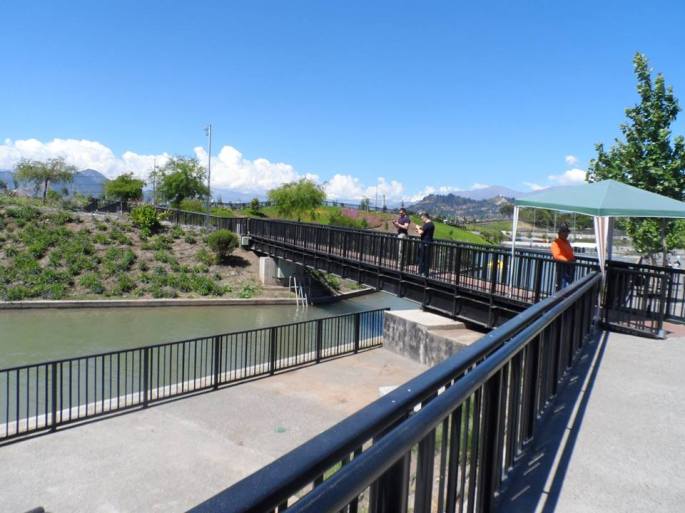 The downside is that because the park is so new, all the plants have a long way to grow still so shade is scarce.  We did find a spot to linger in and it was glorious just to be so close to the water.  Being from NZ I am used to having the sea in close proximity at all times so I often feel claustrophobic and stifled in Santiago. If you feel like that too then you will definitely enjoy this park, just remember the sunscreen and hat! 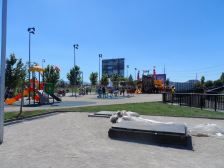 Or visit this excellent site (Spanish).

The Reasons to Love: 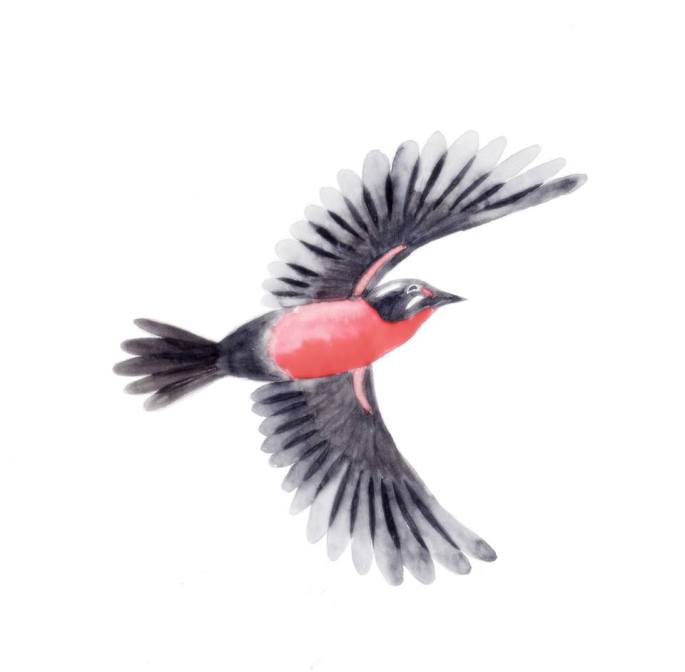 Who was it that said, “the only true wisdom is knowing you know nothing?” 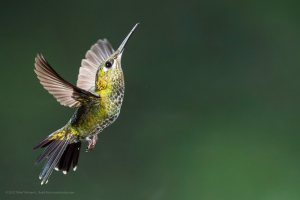 I will tell you. It was Socrates, the man I would have tried to marry if I had been born over two thousand years ago.  The Greek philosopher may not have been a looker (so they say) but he whipped the young people of Athens into such a frenzy that he was found guilty of disturbing the peace and forced to swallow poison. Nice*

The reason that I bring him up is that I often mull over deep, existential questions when I’m travelling on Santiago’s (excellent) metro system.  The commute to Nunoa is like a lesson in “How to Enjoy Life as a Sardine” because at rush hour its impossible to do much else but use the little grey cells of the brain. You don’t even need to hold on to anything because men very kindly squish themselves so deeply into your behind that its impossible to move. Or run away.

My academic background is in social anthropology. I just love people. When I meet a person I take in everything about them, from how they speak to how they dress, and I store this information away, to be put together at a later time.  I see their stories in front of me like I see their eyeballs – unique but also formulaic, and thus predictable to a degree.

Emphasis on the “to a degree.” It’s really quite impossible to make generalizations, especially when all the information you take in enters via several filters, whether they be filters of the senses, beliefs or of your own life experiences. This causes a difficulty in objectivity. That is why this blog is about my experiences in Chile

, and not about any grand general statements about its people.

I was walking to my English class today when I saw an elderly gentleman sitting on a fold-away chair, out on his doorstep, in the street. He was alone and wasn’t do anything special, just sitting and watching, at that moment, me walk by.  Later, as I tried to escape appendages on the metro, I considered him again and I was struck by a thought: in nearly every country I have been to, I have witnessed similar behavior!

When I stayed with the adopted family of my uncle in Rural Gujarat, India, I would assist the aging patriarch to his porch each morning and there he would sit, until lunchtime. After lunch, back out he would go until the evening, when the whole family would soujourn to the living room and share the immensely bonding experience of Indian soap-watching.  He did absolutely nothing the whole time … that I could tell. Maybe he was seeing something that I just could not.

In England, my own grandparents would dust their sunroom with glee as spring approached, and summer was spent doing something similar, albeit with a healthy barrier of glass between them and nature.

In the north of New Zealand, we live outside come rain or sunshine, and I would argue that Sitting on the Deck is a national pastime.

In all these instances it’s plain to see that we human beings are united in our desire to enjoy the outside world, which seemingly increases with importance as we age.

What I love about its occurence in Recoleta is that it is an action without prejudice. We don’t have the best streets – hahaha (excuse the laugh).  In case you are wondering why I chuckled I will paint you a clearer picture. Santiago in general doesn’t have good roads (except the highways) and even the nicer areas flood after a drop of rain. Here in Recoleta its almost impossible to use a pushchair thanks to the broken footpaths, the roads are filled with potholes, and there’s always a dog every few metres that kindly offers you a present when you walk by. There’s rubbish everywhere, perhaps because people leave their rubbish bags outside and the dogs rip into them. Worst of all, when it’s warm, it gets stinky.

If it sounds like I can’t write a much worse description of the place I call my home, let me pause here and tell you one thing. On a sunny day, this smelly pot-holey barrio becomes heaven.  Maybe I say that because I love observing cities and their inhabitants, but the truth is it really is magnificent when the sun is shining.  Every house is unique, no one style employed in design, and the extravagant paint work bursts forth like an explosion under the sunlight. Every house and apartment keeps plants that have the power to transform even the most mundane of dwellings, and what you can find on the roadside is surprising. By my house there is a line of aloe vera plants. Nearby there are cacti with such aggresive spikes that they jut out into the road and dare you to walk by (seriously, they are so spikey you have to actually step off the footpath and walk around them – I’m surprised no-one has been seriously injured there). There are flowers of every description that bloom over fences and brighten doorways, and there are plum trees so laden that they drop their heavy purple fruit onto your head as you walk underneath.  I remember months ago we were walking home from taking the recycling (Recoleta recycles – woop!) and I saw a very elderly couple with thinning white hair out in the street and trimming the trees. It struck me how happy they were, how they were laughing and joking like teenagers while taking the time to care for the street. The moment really touched me.

So to return to the eternal question: what makes us human?  I have no idea but I want to say that the answer could be found in the way we always try to re-connect with the outside world, especially as we age. But the anthropologist in me hesistates to say anything and I leave you here with another tidbit from my past lover, Socrates: “true wisdom comes to each of us when we realize how little we understand about life ourselves and the world around us.”

* If you can, have a read of Plato’s Apology, which details Socrates’ trial. The man could debate.